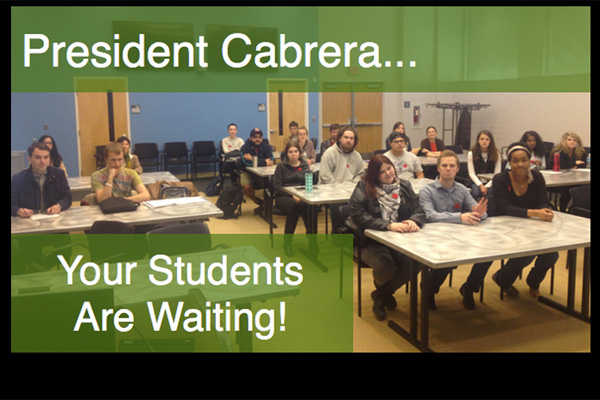 Ask Me Anything: No Show

While studying activist art forms, the Eco-Art course took an on-campus field trip to President Cabrera’s “Ask Me Anything” Event. The class had learned that a student group called “Transparent GMU” would attend the town-hall styled meeting with the President of George Mason University and intended to ask questions regarding GMU’s involvement with the Koch brothers – billionaire corporate titans infamous for their right-wing ideology, anti-evironmentalism and tremendous influence on governmental policy. The Koch’s lobbying and campaign finance efforts are well known. What is less well known is their work financing and influencing educational institutions. George Mason University is said to have received the greatest amount of donations from the Kochs since 1985 – The Koch’s money propping up multiple “free market” institutes at GMU.

…anyway, we went to the meeting with questions in hand, only to find that President Cabrera was no where to be found. The Eco-Art course was treated to an impromptu discussion on the effects of corporate investment on the educational missions of public institutions, now-hosted by Transparent GMU.