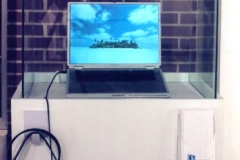 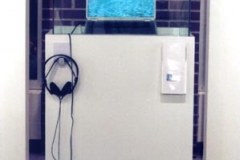 uConnect is an attempt to deal with the materiality of digital commodities, commerce, and culture. Mocking both museum and retail showroom aesthetics a computer display sits atop a pedestal under a vitrine exhibiting a stock tropical island screensaver. Interrupting this banal yet inviting simulation is a soundtrack made up of recordings of workers in the microprocessor industry testifying to the hazardous working conditions in so-called “cleanroom” environments. As the testimonies unfold it becomes clear that “cleanroom” facilities are constructed to protect technological components from the contamination of humans, yet provide little or no protection to humans from the toxic effects of the dangerous chemicals used in the manufacturing process.

The value of the human life and the decline of all of earth’s life systems (due in large part to “technological advances” of the 20th and 21st centuries) is continually eclipsed by the next wave of consumer gadgetry that offers endless ways to negate and disguise the real in favor of the virtual. The piece has a similar appearance and conceptual framework as many ready-mades or object appropriations yet seeks to make explicit the political economy of the object in ways often left out of common-object-as-art scenarios. Detourned laptop computer advertisement pamphlets, featuring a juxtaposition of digital euphoria and consumption with the abuses suffered by workers in high tech industries, are provided for gallery visitors to browse and take.