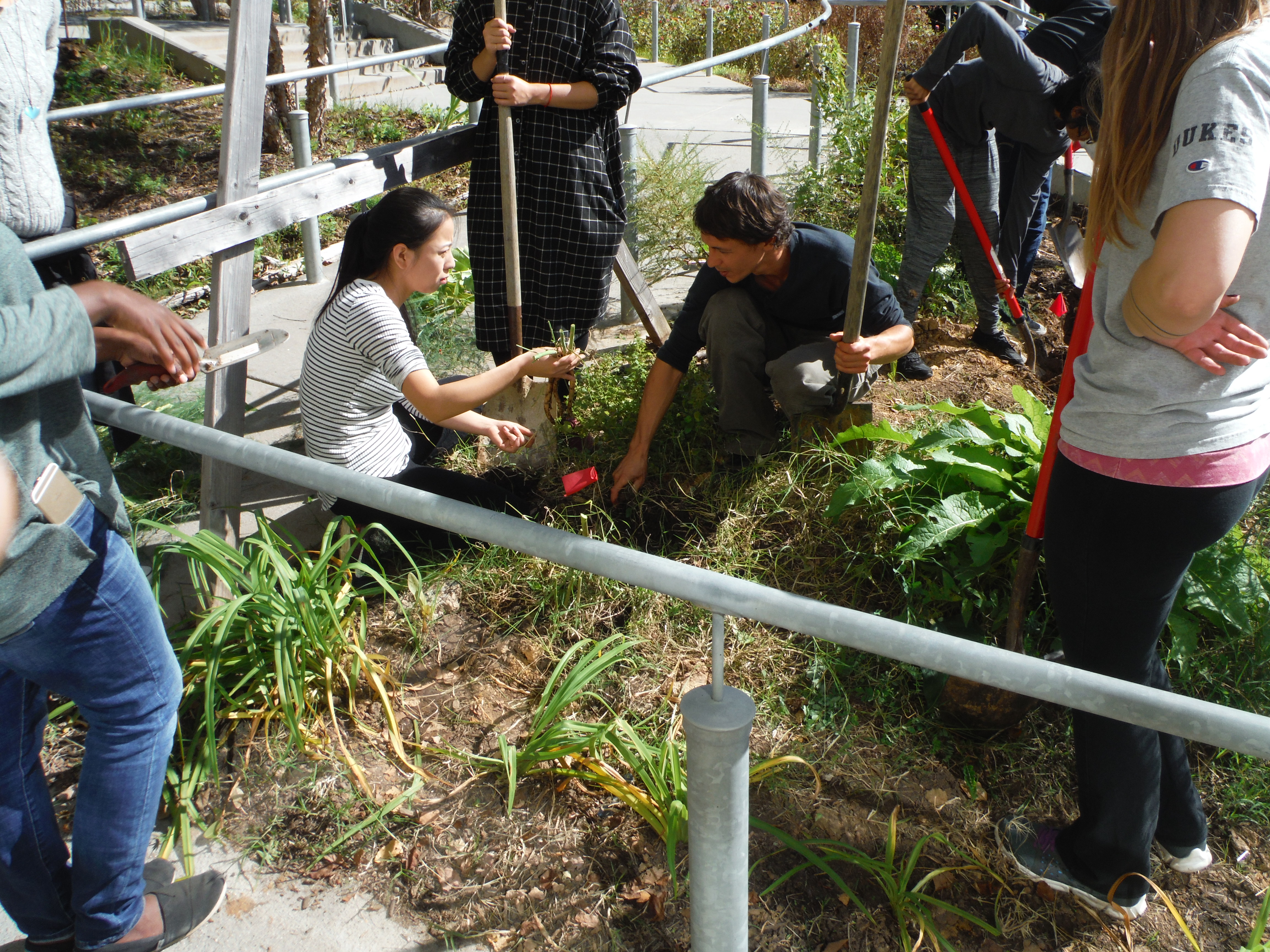 The School of Art offers a residency program for artists interested in carrying out eco-art projects in the Green Studio. If you are interested in applying or would like further information on Green Studio Eco-Artist residencies please contact Green Studio Director Mark Cooley @ mcooley(at)gmu.edu.

Robert has been the resident GreenStudio eco artist since 2015. Under Robert’s care, the studio has flourished and has made real strides in areas of erosion control, soil improvement, and species diversification, all while facilitating student projects and expanding the ways that visitors may interact with the space.

Justin Raphael Roykovich is an interdisciplinary artist working along the Northeast Corridor. He received his MFA in Visual Art from the Mason Gross School of the Arts at Rutgers University in 2014. Previously he received his BFA in Art and Visual Technology, cum laude and with departmental honors from George Mason University in 2011 (after many years of an undergraduate adventure). His work is based around exploring specific geographic locations to expose and document the layers of history, folklore and psychic scars that are left by the intersections of physical, mental and emotional experiences on that site. He stages scenarios where he hopes his viewers can enter the space of his explorations into environmental memory. His work as been shown across the United States and internationally. In 2009, Justin and fellow student Vina Sananikone, began planting flowers and vegetables around the newly built Art and Design building on the GMU campus and in the process helping to turn a construction zone into a participatory garden landscape. This effort was instrumental in the creation of Green Studio as concept and formalized space for students to work. It is therefore, quite fitting that Justin has returned to George Mason University as a professor and as artist in residence for the Green Studio.

Vinson’s work at the Green Studio as Resident Artist has accumulated over 200 hours for over two years, in addition to passionate volunteering. Preceding his education at GMU, Vinson pondered about an adventurous lifestyle after graduation. Having dreamt of living in a small space, particularly a boat, his adventurous dreams expanded to ideas surrounding the concept of sustainable living and farming. At the age of 5, he once expressed a unique and distinct interest in becoming a pig farmer while at a petting zoo, once located at Frying Pan Park, Fairfax, Va. Vinson has over 8 years experience in the acting, film and photography industries, which cater to his complimenting interest in the Arts. After a fulfilling experience, Vinson decided to leave LA, and go to his hometown in Virginia to complete a bachelor’s degree toward his life passion in sustainability. He dreams of pursuing a life creating a bountiful permaculture farm and living in natural buildings following his graduation in December 2015. Vinson has helped plant over 25 species in the Green Studio. He also created a digital map of the space for identification and foraging maps of those, and other species, within the Green Studio. Leading a volunteer EVPP 480 class to help in the studio, Vinson taught of the abundant species of plants and dynamic relationship they have with each other, as well as of the animals that frequent the space. The Green Studio solidified to Vinson how art and science, as well as other subject matter, compliment and coincide, in contrast to than fragmented nature of departments on campus. He looks forward to the thoughtful projects that will continue in the space and hopes the space offers similar experiences to others that The Green Studio offered him.

Doni Ward graduated from Mason in the spring of 2014 with her BA in Biology. During her years as a student she volunteered for Monica Marcelli in the greenhouse and always dreamed of having her own greenhouse one day. For three years she was the President of the GMU Organic Garden Association. In 2012 she was hired by Mark Cooley to manage the School of Art Green Studio Garden for two semesters. She then joined the Office of Sustainability in 2013 as the summer intern for the Potomac Heights Organic Vegetable Garden and later as the assistant coordinator for the 2014 Permaculture Design Certification Course. After working all summer in the garden, she knew that growing food was her passion. She is delighted to continue teaching students and community members about growing their own food through her current position as the Greenhouse Coordinator for the President’s Park Greenhouse. The facility will utilize hydroponics to grow lettuce, micro greens, basil and other herbs that will be served at Ike’s dining hall. If you would like to get involved, please contact Doni at dward10@gmu.edu. To learn more about the greenhouse go to http://www.facebook.com/gmugreenhouse

Suzanne DeSaix graduated from GMU in 2012, concentrating on papermaking and printmaking. For one of her teaching practicums, she co-taught an Agri-arts course with Mark Cooley. She introduced students to papermaking; organized a field trip for students to learn field identification of edible plants and visit an off-grid sustainable vegetable garden. Involved in the initial development of the Green Studio, Suzanne developed a plan for the permaculture garden artspace with Mark; prepared documentation and guided class discussions on preparing a mission statement and process for artists to submit installation proposals.

In 2013, Suzanne was an Artist-Consultant and Manager of the Harrison Farm component of the Green Acres exhibition at Arlington Arts Center in Arlington, Virginia. She works as an independent Artist showing her work regionally; conducting papermaking workshops; and combining her work as an artist with citizen science projects focused on native plants, ornithology and watershed protection. She is a certified Virginia Master Naturalist working out of the Banshee Reeks Chapter, Loudoun County, Virginia.