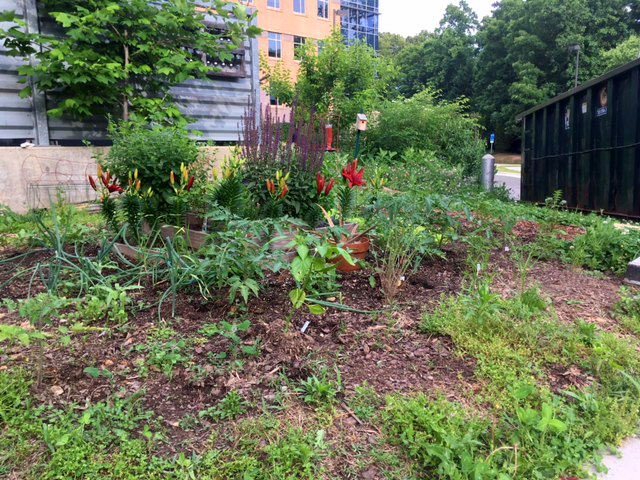 The organic vegetable garden was established in the George Mason University (GMU) School of Art Green Studio space in May 2016. It was built by a team of students enrolled in AVT-385, Eco-Art under the guidance of Professor Mark Cooley.

Garden Box
The centerpiece of the Garden is a handsome three level pyramid shaped cedar wood garden box (pictured). It was developed on a patch of land in the Green Studio space near the Art and Design Building parking area, off of Patriot Circle. Cedar wood lumber was selected for its durability and the fact that it does not contain chemicals. Newspapers were placed under the structure for weed control.

Fresh, Healthy Organically Grown Vegetables
Perennial flowering plant species were planted on the top level of the garden box to attract pollinators such as butterflies and hummingbirds. A hummingbird feeder was added to the site to complement the perennial plants. The middle level of the garden box contains several medicinal herbs while the base level contains seasonal rotating organic vegetables starting off with arugula, chives and kale.

Because of the limited planting space in the garden box the surface area on its perimeter was prepared with organic topsoil to raise the total amount of planting space to approximately 40 square feet. Initially, traditional spring organic vegetable crops were planted from seed and bedding plants in the surface area. Some of those crops are cabbage, carrots, lettuce, peppers, radishes and tomatoes. Collard greens were planted from seed as it is a popular crop in the American South where GMU is located.

Pop Up Pantry
University Life started the Pop Up Pantry, located in the Sub II Building, during 2015. Food, clothing and household items are provided, without charge, to those in need in the GMU community. For more information about the Pop Up Pantry visit: http://ulife.gmu.edu/get-help/pop-up-pantry/

The provision of fresh, healthy vegetables to the Pop Up Pantry addresses a hunger issue that exists in the GMU community. This is done to provide humanitarian assistance to folks in need. The organic vegetables are a welcome supplement to canned food items already distributed by the Pop Up Pantry.

The additional benefits of the Garden are fourfold:

1). The Garden will be used as a laboratory by the School of Art faculty to teach students about best practices in gardening and ecology. This builds on the foundation of the Green Studio that is already an important teaching tool.

2). As a next step, knowledge gained from the development of the Garden will be transferred to entities and individuals by making posts to this Web site. Information about how to build a garden box including approximate cost, recommended materials to use, tools required and alternative designs will be shared with users of this Web site.

3). Academic research on what has been learned from the Garden can be used as a basis to take steps toward developing solutions for people affected by food insecurity in certain geographic pockets of Virginia. Such a research project could be funded by a grant obtained from a government or non-government organization. It would pay for a graduate school assistant to conduct the work.

One concept is to have GMU, a local government or housing authority partner with residents of a community with a food insecurity problem. Residents of the affected community would help to design, select sites and construct raised bed garden boxes. The entity funding the project would acquire building materials, tools and vegetable seeds and plants. Such a grassroots type process would help to gain buy-in of residents and have a positive affect on the outcome. This model would be performed with volunteers, although it is possible if the project scaled up there would be paid employment opportunities.

4). It is hoped the Garden will become a recognized spot on the GMU campus for meditation and reflection. It will provide a welcome respite from the workaday world in which we live. 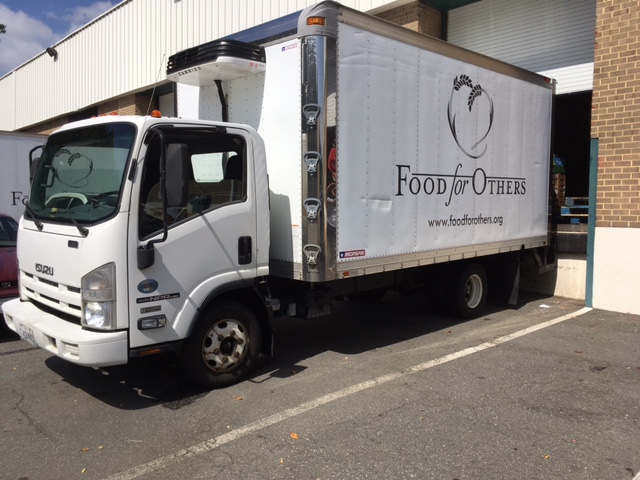 -A total of 12 deliveries were made to the Food for Others distribution center in Falls Church, VA (I took the attached cell phone picture of one of their trucks when I made a delivery this afternoon).

-The total of organic vegetables/fruits donated was approximately 77 gallons.

-There were 2 broods of bluebirds that laid 6 eggs each.

-Ruby Throated Hummingbirds continue to visit the feeder in the garden.

-The Goldfinch birds really enjoyed the seeds from the zinnia flowers. 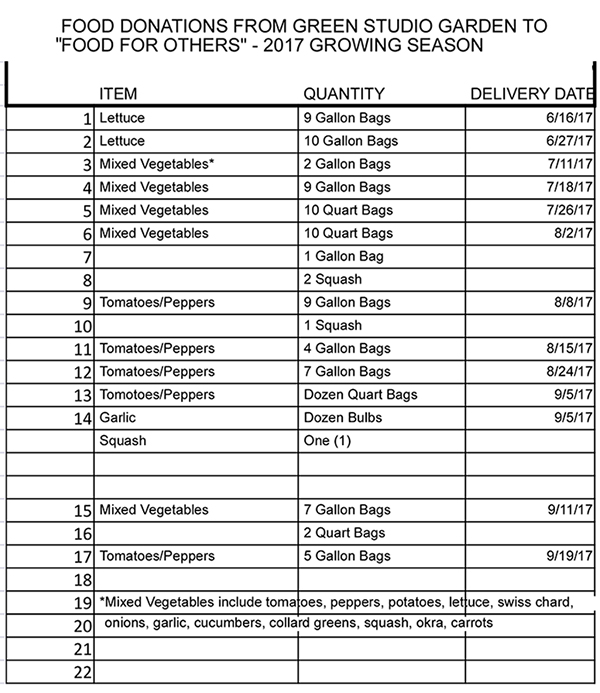